The system is designed to control a large number of abrasive kilns at the same time. The introduction of a control system for the technological process of firing products has led to a decrease in energy costs. The system has ample opportunities to control and manage the technological process. Automation of basic operations and a developed user interface can significantly reduce the requirements for operator qualifications without reducing the requirements for technology aging. The hardware and software solutions used in the system ensure its high reliability. 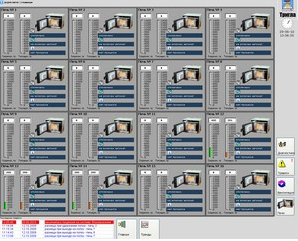 General view of the furnaces

Typically, the main disadvantages of older installed systems with distributed modules connected via RS-485 are:
– due to erroneous actions of the furnace operator, the night firing could start either earlier (capturing the time of day, a higher tariff), or later, which led to the loss of the most optimal time for carrying out the technical process;
– there is no possibility of remote monitoring of the state of the oven thermostat, which is why the detection of an abnormal situation occurred with a delay. As a result, some of the kilns may not have completed the firing program at all and had to be carried out during the day;
– there is no control over the power consumed by the furnaces, has repeatedly led to accidents of varying severity at the substation as a result of overload;
– there is no record of the operating time (operating hours) of the furnaces, due to which there is no objective control over the state of the heater coils, and their timely replacement is not carried out.

The installation of an automated system should solve the following tasks:
– reduction of energy costs by reducing the influence of the human factor on the operation of equipment and more rational use of the time of the night electricity tariff;
– operational signaling and logging of the technological process;
– prevention of emergencies;
– automation of document circulation of reporting documentation. 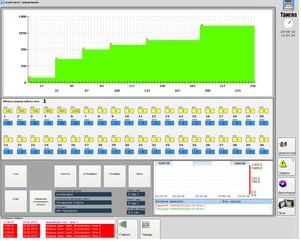 For the implementation of the ACS, a SCADA system was used for monitoring, collecting, archiving and visualizing data and a control system based on an industrial controller to control the course of the technological process and implement control algorithms for furnace thermostats. Selected Schneider Electric products are the Citect 6.1 SCADA system, which provides the optimal combination of ease of implementation and functionality, and the M340 controller, which offers the best price-performance ratio.

The developed automated control system for roasting furnaces consists of a single control rack, in which a controller is installed and coordinates the equipment, a workstation PC, a monitor with tactile control, and an uninterruptible power supply unit. The equipment existing at the enterprise (thermocouples, thyristor converters with OPTRON control) was used as the lower automation.

The ACS visualization system performs the following functions:
– task of the degree of firing (up to 40 degrees per kiln program)
– the task of the degree of temperature rise depending on the used recipe;
– scheduling the start-up of the furnaces by timer (automatic control of the start / stop of the programs of the technologist of the furnace temperature regulators in accordance with the set schedule in order to use the technological time as efficiently as possible. This possibility allows you to eliminate the influence of the human factor during the night firing and to make the most of the cheap night rate of electricity consumption)
– a scheduler for starting furnaces with a limitation on the number of simultaneously started (limiting the network load);
– limiting the oven overheating (maximum temperature)
– alarm messages in case of impossibility to reach the set temperature for a certain time (breakdown of the heating elements of the furnace)
– complete diagnostic and adjustment information;
– tracking the temperature regime of each furnace with archiving and displaying the temperature in the form of graphs (trends). The archiving depth is 1 month with a recording frequency of 10 seconds, which is quite enough, since the firing process is rather slow (a complete firing in one furnace lasts from three to six hours);
– counting the operating hours of each furnace with dispensing a message will appear on the need when the set value is reached. Thanks to this function, it became possible to timely replace the coil of the furnace heater;
– control of the state of the programmed thermostats of the furnaces (program execution, waiting for switching on, failure, etc.). The operator was able to quickly monitor the state of the oven temperature controllers and respond in a timely manner in the event of various emergency situations;
– keeping a log of the oven thermostats, which records the event and time.

System extensions are possible:
– it is possible to control the power of operating furnaces. Online calculation of the power consumed by the heaters of the furnaces, and if the switching on of the furnace causes an overload, then it is automatically turned off. This happens at the controller level, regardless of the operation of the SCADA system. Also, when you try to turn on the furnace via the network with the AWP, the power consumption is calculated and, if it exceeds the nominal, a message is issued about the impossibility of turning on;
– preparation of reports on the operation of each furnace in MS Excel. The reports in which the operating time of the furnaces is indicated (with an accuracy of minutes) and the calculations of energy costs are carried out, are composed automatically, and the format of the MS Excel spreadsheet processor allows using this data in the factory workflow.