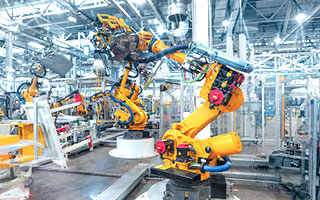 Company “Trigla” specializes on industrial automation and control. We employ professionals to do the job, will find an alternative solution for creating automation systems of any complexity.

Most of management systems, based on PCS – computer-integrated automated control system (ACS).

Main technical equipment of these systems – computers, their use allows you to integrate several functions automation, significantly expand opportunities APCS.

In practice, computer-integrated management system (CIMS) emerged as development of integrated automation, which are based on ACS.

– main equipment automation of process, to maintain the desired settings, as well as its full-time or emergency stop by the ACS;
– auxiliary equipment automation of the process by the ACS;
– implementation of possibility to change parameters of automatic operation PCS operator mode, remote or manual control actuators APCS;
– necessary steps to ensure trouble-free process protections, as well as reliability of the lock respectively regulations APCS;
– information support operator workstation (display of information on process automation systems in the form of mimic diagrams, graphs, trends, tables, print reports, reports in the form agreed with the customer APCS);
– parameter adjustment of object using the ACS software controls the parameters of which are determined by the automation project;
– maintain an archive room, the ability to analyze historical information for a specified period of time of ACS;
– protection against unauthorized access to settings and data stored progress APCS;
– continuous diagnostics of connected equipment, including self-test process control system;
– optimization of control object on basis of ACS.

– ACS (ACS process) – an automated system designed to implement control actions on control object, according to the criteria adopted by management. ACS performs its functions on a per-machine or technological complex (TC), which belong to the plant, office, shop or production;
– CAM (now ACS) – an integrated automation, designed for efficient management of production and economic activities of company;
– IACS (integrated AMS) – a set of two or more interconnected automation, in which the function of a single automated system depends on the functioning of the other so that their interaction can be regarded as a single ACS.

Concept of an “integrated” ACS is widely used in title of modern automation systems, but very often has a different content. Most often system, which integrates the functions of automation systems and manufacturing automation systems, ie functional (SAI = PCS + CAM). This formula can be represented in more detail, deciphering its individual components: (SAI = PCS + CAD + CAM of ADR), ie, added computer-aided design (CAD) and automated quality control system (of ADR). PCS, as can be seen from the above definitions, sometimes also referred to as integrated, referring to the union of several software packages integrated into one.

With the introduction of management systems based on the PC as the main technical means, there is a new term: Computer Integrated Management System (CIMS). CIMS – hierarchical distributed system that integrates the functions of technological and organizational processes of the enterprise consists of workstations, local area networks combined.

Structurally integrated automation consists of two main parts: the PCS and CAM. ACS also has two main parts: a local area network (LAN) and process control system. With regard to the CAM (currently more widespread its other name – the corporate system for managing business processes KSUBP), comprises two parts: the corporate computer network (FAC), which brings together, as a rule, several local area networks (LANs ) and a system for managing business processes. KSUBP unlike CAM solves two problems: the first – a disparate networks, the second – creation of a unified system of business process management.

Main activity of the company “Trigla” in the field of automation and control systems, as well as their subsequent implementation:
– development, modernization, implementation of automatic process control – process control system (enterprises paper, food and other industries);
– development, assembly boards and control panels;
– creation of a computerized traffic control points using imaging systems of technological processes on the basis of SCADA-programming or operator panels of different manufacturers.

Qualitatively, in a short time performed a full range of works from designing to commissioning of your automation systems and (or) control system.