Description of the technological object
The technological object of control is a part of the paper machine from the machine tanks to the roll-up. The PM control system includes the following subsystems and functions:
– Control of the headbox of the main and cover layers (pressure, level, overflow)
– Controlling the concentration of the main and cover layers;
– Massenet’s control of the latch of the main and cover layers;
– Level control under couch and flush valve;
– Control of the steam condensate system;
– working off the “break” mode;
– Control and monitoring of the parameters of the vacuum system;
– Integration with the quality control system installed at the enterprise;
– Automatic control of paper web weight in the machine (MD) direction;
– Automatic control of paper web moisture;
– Measurement of dryness in the wet part of the paper machine;
– light sound warning alarm;
– Nozzle control;
– Control of formatted cut-off;
– Keeping statistics (hour, shift, day) on the main indicators;
– Keeping graphs of technological parameters.

technical solution
A Siemens programmable logic controller is used as the basic element of the process control system. Visualization is performed on SCADA from one of the leading manufacturers. The construction of the system is carried out in such a way that the subsystems operate in the following modes:
– manual;
– automatic;
– cascade. 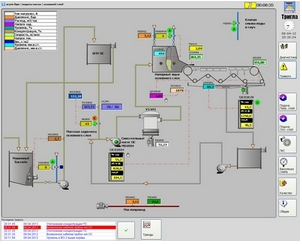 The standardization of the units and the structural arrangement based on industrial controllers will allow the system to be serviced by trained personnel. The system has an open architecture and can be easily upgraded to carry out the next stages of work on the modernization of the process control system. Further build-up of the system will make it possible to create a unified control system for the entire paper machine with a unified control structure. 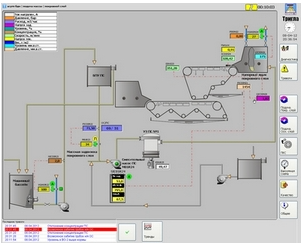 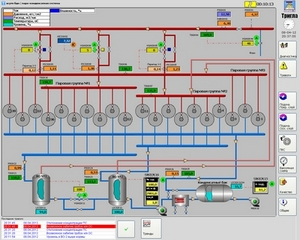 Results and effect of implementation
The PM control system will allow the functioning of all PM control subsystems as a whole and, as a result, significantly improve the quality of the products. The introduction of feedback from the quality control system on the parameters of weight, humidity in automatic mode will significantly improve the competitiveness of the products. The payback period for the implementation of the system, depending on the configuration, will be from 3 to 12 months.